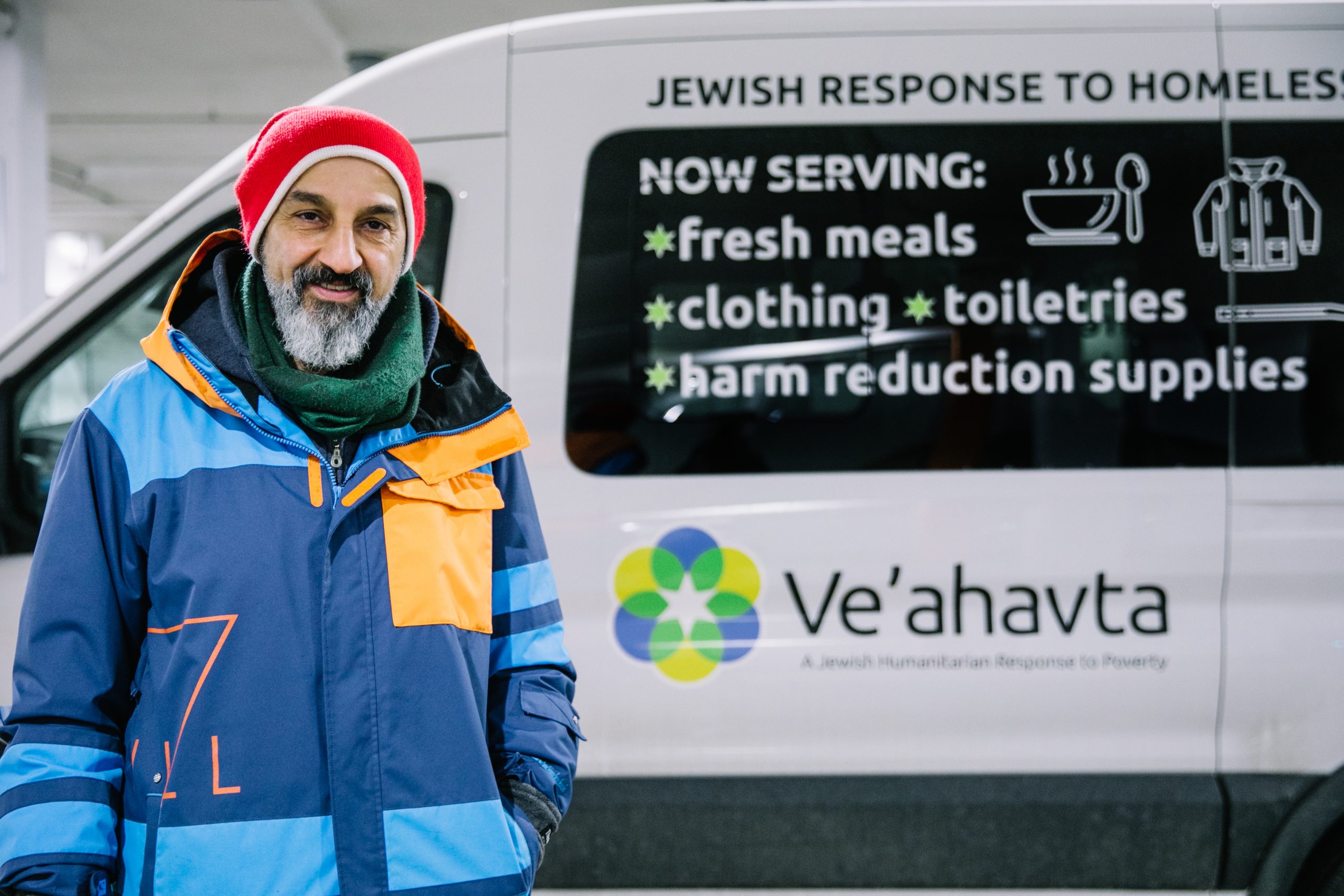 Younadiam, a Ve’ahavta client, meets up with the Mobile Jewish Response to Homelessness outreach van on a cold winter’s night. CONNIE TSANG PHOTO

For Younadiam, a refugee from the Middle East, help came in the form of a brand-new winter coat. Six months ago, Younadiam had to move out of a shared apartment and ended up living alone in a community shelter. That is when he first met up with Ve’ahavta’s Mobile Jewish Response to Homelessness outreach van and received the warm clothing.

Over time, Younadiam has become a “regular” of the Ve’ahavta van, developing meaningful relationships with the outreach workers who drive their route through the city.

“They’re an amazing organization. They’re here every night – and they don’t judge me or my choices,” says Younadiam.

The Canadian Observatory on Homelessness defines homelessness as “the living situation of an individual or family who does not have stable, permanent, appropriate housing, or the immediate prospect, means and ability of acquiring it.” People become homeless for a variety of reasons, including migration, losing one’s job, inability to afford rent or mortgage, break-up of relationships and eviction for non-financial reasons.

According to the City of Toronto’s Street Needs Assessment report, close to 9,000 people experienced homelessness in 2018, and the numbers have been growing steadily. Some, like Younadiam, live in a shelter, others couch-surf between friends’ homes or stay in other temporary locations. Between 500 and 1,000 individuals “sleep rough” – that is, they sleep outside each night in parks, under the Gardiner Expressway and on grates found on city streets.

For more than 20 years, Ve’ahavta’s outreach van has been serving the needs of these individuals experiencing homelessness in Toronto. Today, the van goes out six days a week (there are no shifts on Friday evenings), 52 weeks per year. With the recent donation of the use of a larger van from Discount Car and Truck Rentals, two professional outreach workers and three to four volunteers now go out on each shift.

The van provides healthy and hearty food, along with coffee, water, essential clothing, extreme-weather supplies, hygiene supplies and harm-reduction kits. Yet, the van is so much more than food and supply distribution for individuals experiencing homelessness. The trust that the outreach workers and regular volunteers develop with the van’s clients leads to successful referrals, including medical, housing and other forms of support. Sometimes that relationship-building takes years.

Some of the individuals move on to other Ve’ahavta programs that help people build greater stability and prepare for the workforce. Barbara Berryman recalls the blanket she received from the Ve’ahavta van at a time when she was living in a shelter. “I was approached by volunteers and … they provided me with a nice warm meal and hot drink and a blanket – and that blanket I still have today to remind me of how far I’ve come,” she says. 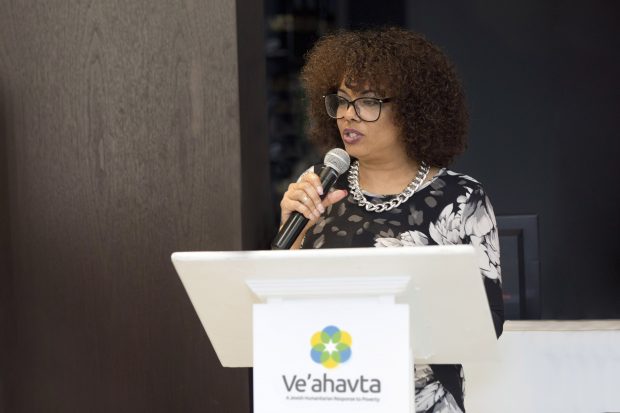 Barbara Berryman speaks to groups about her experiences with homelessness. MICHAEL RAJZMAN PHOTO

Berryman attended Ve’ahavta’s Skills Academy, Speakers Bureau and the MyToronto photography program. She now shares her personal story as an ambassador for Ve’ahavta. (You can see more about Barbara’s story on Ve’ahavta’s blog.)

Going out in the van is often a profound experience for the volunteers. Recently, Ayotunde Fatola, an MBA student, became involved with Ve’ahavta while working on a project assessing the economic impact of homelessness in Toronto. He volunteered with the van program one evening last September.

“My shift began at 6 p.m., loading the outreach van with food, clothing and other personal hygiene materials before heading out. The van made eight stops over the five-hour shift in what was, to say at the very least, an eye-opening experience for me. I got the opportunity to understand the value of the organization’s efforts for people in the local Toronto community.

“The rapport between the Ve’ahavta staff and those we went to serve really stood out. Ve’ahavta staff had established friendships with some of these people – cracking jokes, sharing insights and checking up on their progress, all to my amazement. It later came to my understanding that because the van goes out six nights a week, the staff are able to build relationships with some of these people. It did not necessarily always feel like we were helping those ‘less fortunate.’ Instead, at times, it felt as though the staff were going to check up on friends in the community – ensuring their well-being.”

Ensuring people’s well-being is particularly challenging during the winter months, especially during the extreme cold weather alerts. People who sleep outdoors in the cold face the risk of dehydration, frostbite and/or hypothermia.

Furthermore, there are not always enough shelter spaces for people to go to, and tragically, there have been a growing number of deaths of people experiencing homelessness.

In January 2017, the City of Toronto began tracking and reporting on homeless deaths in this city. By the end of that year, at least 101 citizens of Toronto had died while experiencing homelessness. That is approximately two people per week.

In 2018, Ve’ahavta started the Cold Night Fund in order to strengthen its outreach program. While many generous corporate donors contribute annually, the van receives no city funding. The majority of the funds raised are from individual contributions from people in the city who care about our neighbours who are experiencing homelessness.

Support individuals on the coldest night of the year and all year round.