Danny Richmond: Jews have a duty to native peoples

Danny Richmond is director of community engagement at Ve’ahavta, a Jewish social service organization dedicated to promoting positive social change. Richmond, 30, has worked for more than a decade in youth leadership, community mobilization, interfaith engagement and international development. An activist and former campaign manager for the Tony Blair Faith Foundation, Richmond’s role at Ve’ahavta includes working to engage the Canadian Jewish community in building partnerships with Canada’s indigenous people. With Ve’ahavta wrapping up a new, four-session educational series called “Walking Together: Learning about Indigenous Culture, History and Struggles as Jews,” The CJN spoke to Richmond about reconciliation, solidarity and tikkun olam.

Why does Ve’ahavta need a community engagement department?
At the core of Ve’ahavta’s mission there’s the value to engage the Jewish community in acts of repairing the world. The community engagement department is responsible for mobilizing the Jewish community through education, volunteerism, leadership development and supporting Jewish communal institutions to be agents of tikkun olam. This cuts across three priority issues for Ve’ahavta: homelessness, reconciliation and international crisis. The second refers to reconciliation with indigenous people. It means working in solidarity with Canada’s indigenous peoples. 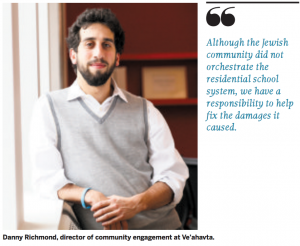 Ve’ahavta has had a longstanding relationship with First Nations communities in Toronto. Can you explain what that’s looked like?
Part of our founding story is that our outreach van, which distributes food and support services to people experiencing homelessness, was initially a partnership with the organization Native Men’s Residence (Na-Me-Res). We no longer have a formal partnership with them, but both Ve’ahavta and Na-Me-Res continue to have outreach vans that go out, and we continue to work closely with them.
The shared van was one concrete manifestation of our partnership, but the real thrust of our involvement with First Nations communities has been expressed through two of our crucial initiatives – the first of which really made indigenous issues a focal point for Ve’ahavta. This is Briut Ontario, our health promotion initiative in partnership with the Kenora Chiefs Advisory (KCA). Three or four years ago, we were given an Ontario Trillium Foundation grant to work with the KCA advisory to do health promotional programming in that region.
The other big piece was that we helped draft a statement of solidarity and action in collaboration with the Centre for Israel and Jewish Affairs (CIJA), the Canadian Council for Reform Judaism (CCRJ) and the Toronto Board of Rabbis at the national closing event of the Truth and Reconciliation Commission (TRC) of Canada. The statement acknowledged that we have a responsibility to work in better ally-ship and partnership with First Nations, Inuit and Métis people in Canada. The reality is that it’s hard to look at any form of media these days and not see the social justice issues faced by indigenous communities. Part of the evolution of Ve’ahavta has been to work to tackle these issues. It’s now a core part of our strategy to engage the Jewish community to see how it can work in better relationship with indigenous communities.

What are Ve’ahavta’s priority areas with respect to this cause?
We have four key strategic areas: 1. providing opportunities to act alongside and learn from indigenous communities; 2. providing educational resources to Jewish organizations to better learn how to work with indigenous communities – for example, we published a resource for synagogues, largely in response to their asking us to, to respond to the TRC calls to action; 3. leadership development; and 4. working with our Jewish communal institutions to support the TRC calls to action – for example, last year we ran a professional development day with Jewish educational institutions. The idea was to assist educators in better incorporating indigenous culture and history into their curricula. That program will run again this year.
We’re also working with CIJA and CCRJ to create a Canadian Jewish Indigenous Reconciliation network to act as a hub to mobilize the community around these issues.

What responsibility does the Canadian Jewish community have to First Nations communities in Canada?
We have a responsibility to repair the world and address injustices where we live. Even though the Jewish community didn’t perpetrate or organize the residential school system, as citizens of Canada and as people commanded to pursue a more just country, we have a responsibility to work in partnership with indigenous communities to repair damages done. We’re not approaching it from a place of guilt or shame, but solidarity, especially because of our shared values and experiences.

What do you see as some of the shared values between Jews and First Nations people?
There are so many. Values like the importance and transmission of language, the family as a cornerstone and the importance of land. And both groups have unique experiences of recovering from genocides. That forms a powerful place from which to build solidarity.
The reason I got involved personally with this sort of work was that I was asked to speak on a panel at a TRC event about what it’s like to be a grandchild of Holocaust survivors. A friend of mine also spoke as a descendant of residential school survivors. I was struck by what he said and the similarity of both Jews and First Nations groups being told to “just get over it.” I think we have a shared understanding of the pain of that statement.

Are there dangers to drawing parallels between the experiences of Jews and First Nations people, particularly with regard to comparing genocides?
Absolutely. When I say we have shared experiences, I don’t mean identical. But we’re in a position to understand some of their challenges. By no means would I ever equate the residential school system and the Holocaust. They’re very unique genocides with different contexts, timelines and crimes, but I acknowledge both of them as genocides. I don’t think that takes away from the Holocaust, but gives us as Jews a good platform from which to empathize.

Does the work you do in terms of dialogue and education include examining historical encounters between early Jews in Canada and First Nations people, namely, the ways Jews may have been complicit in injustices against indigenous people?
The lens we look through is to see ourselves as Jewish Canadians. Although the Jewish community did not orchestrate the residential school system, we have a responsibility to help fix the damages it caused.

What is the goal of the “Walking Together” program?
The idea is for members of the Jewish community to learn about indigenous issues from indigenous educators as well as to reflect on our similarities, differences and how we can be better allies to the indigenous community. All of the sessions are led by indigenous community members, elders, teachers and educators and the ensuing reflections are done by some of our partner synagogue rabbis or by Ve’ahavta staff. Our purpose is to really listen to indigenous teachers and educators and then to reflect in a Jewish context. All the events, both for this program and others, which Ve’ahavta has put to build solidarity with indigenous people, have had such a positive response. There is such a desire among Jews to engage in these issues and we’re really trying to respond to that, as well as to acknowledge injustice and work toward repairing it.

This interview has been edited and condensed for style and clarity.