Ryan Jelilyan’s family had never seen him so excited and engaged. For several years, Ryan, 23, had been suffering from depression and anxiety, unable to sleep, lacking the motivation to get a job and not doing much during the day. It was a life that was leading him, he says, “down a path of nothingness.” 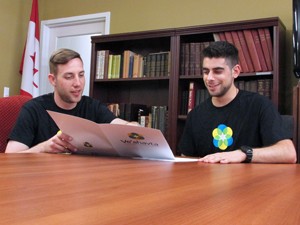 Ryan decided to take a chance and attend VSA.

At first he was scared about having to get up very early. But as soon as he started, he discovered he was actually excited to go. “I saw other students – people who were probably struggling more than I was – develop and evolve so much in such a short amount of time, so I devoted myself to trying my best and to pushing myself no matter how tired I was,” he says.

Whereas in school, Ryan had felt introverted, not talking or participating, at VSA, he rediscovered his artistic side and rebuilt his confidence. “VSA was a judge free zone, so if somebody had an opinion, they were okay to express it. No one judged or criticized.”

Many of the VSA participants are dealing with poverty and mental health or substance use issues. A VSA case worker supports them one-one-on-one during the program and for six months afterward, to develop a plan focusing on goals related to education, employment or personal development. Program graduates can also attend a monthly alumni program, which provides a supportive community as they continue to execute their career plans.

Ryan is now excited about the future. Having only finished high school, he wants to study video game development, film or photojournalism. “I’m not sure exactly yet. I want to take steps in order to learn more, to be able to go every day to class and feel okay and do a good job. I want to be independent, have my own house, my own job.”

After he visited the Holocaust Education Centre with his VSA classmates, Ryan also developed a larger goal. “I felt a deep sense of grief and it helped me to hone in on my idea of creating an organization like Ve’ahavta, to give back to the world.”

Laurie, Ryan’s mother, says, “What we see now in Ryan is a combination of a positive energy, an ability to commit to something and a desire to get up and be there every day. The Ve’ahavta Skills Academy has given my son hope and a new motivation in life. A mother cannot ask for anything more. I believe Ryan is finally on his way, and I am eager to see what is next for him.”