There were some emotional moments for the dozen or so members of the Jewish community assembled in Toronto’s High Park Sept. 8 for a walking tour of significant indigenous sites.

“It’s not easy learning about what our country has done or the ways we’re implicated… but it was deeply moving to see how eager the group was to have these kinds of difficult conversations and engage in these issues,” Sarit Cantor, a community engagement co-ordinator at Ve’ahavta, said of the event, the second in a four-part educational series she designed on indigenous issues. 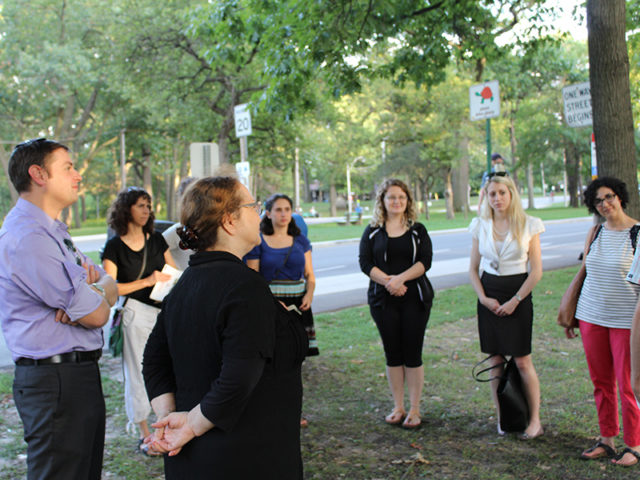 Called Walking Together, the series features four educational sessions running from Sept. 1 to Sept. 22 and is run by Ve’ahavta in partnership with Beth Tzedec Congregation, Holy Blossom Temple, Temple Sinai Congregation of Toronto and the Centre for Israel and Jewish Affairs (CIJA).

On Sept. 8, the series’ 11 participants, as well as several Ve’ahavta staff members and two rabbis – Rabbi Daniel Mikelberg of Temple Sinai and Rabbi Adam Cutler of Beth Tzedec Congregation – gathered in the park for a two-hour evening tour led by Jon Johnson, a representative from the Native Canadian Centre of Toronto and an adjunct professor at York University.

Johnson spoke about the Mississaugas of the New Credit, the Wendat and the Haudenosaunee, three of the indigenous groups whose traditional territory included the land where High Park is now located, Cantor said.

He also showed the group some of the oak trees in the park that had traditionally been used by First Nations groups as markers pointing to certain paths or routes, and he took them to the pond and recounted some of the battles that had happened in the area and showed them some of the sacred mounds that still exist in High Park, explaining that it was customary to offer tobacco there.

Group members asked questions throughout the tour, Cantor said, and the evening concluded with a small teaching by Rabbi Mikelberg about Jewish perspectives on land and the ways that land is crucial to Jews’ sense of rootedness.

The 28-year-old decided to create a four-week educational series to engage members of Toronto’s Jewish community in deeper learning of indigenous issues.

By facilitating first-hand learning from First Nations elders and educators, the program seeks to build strong bridges and trust between the Jewish and indigenous communities.

“Our indigenous programming is mostly a response to the Truth and Reconciliation Commission’s calls to action. I feel the Jewish community is uniquely positioned to learn about indigenous struggles due to our personal experiences of oppression and intergenerational trauma,” Cantor said.

Walking Together incorporates historical teachings regarding treaties and colonial impacts on indigenous people in Canada with what Cantor called “more emotional elements,” such as learning about indigenous rituals and ceremonies from elders.

In addition to the walking tour, the series included an interactive exercise that used blankets to examine the history of treaty-making, colonization and resistance; a tour of the Mohawk Institute former residential school and Woodland Cultural Centre museum in Brantford, Ont., and a talking circle in which participants will meet with an indigenous elder and reflect on their experiences over the course of the program.

Each session has some Jewish reflection facilitated by a rabbi or leader from one of the partnering organizations.

Cantor said the Jewish participants who signed up have ranged from those who are heavily involved in the community to those more peripherally involved.

“It was really meaningful for me to understand the history of the land… [the tour] made concrete for me how essential land is to First Nations communities and the understanding that we share this land,” said Estee Fresco, 31, reflecting on the walking tour.

She added that learning about indigenous issues is important to her “as a human being.”

“The fact that the event was organized by a Jewish organization… and that it was done so thoughtfully was lovely, but these issues are important to me as a person,” she said.