What remains of a people’s identity when a group has been stripped of its language and land?

The question was one of several that leaders from the Jewish and First Nations communities grappled with at a panel discussion held Sept. 6 at Shaarei Shomayim Congregation in Toronto. 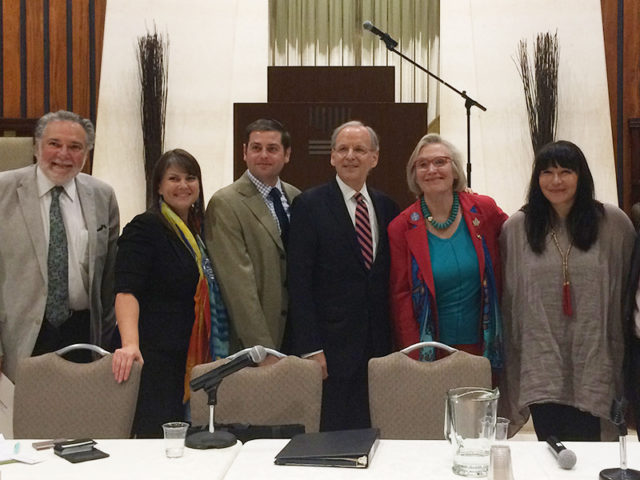 Entitled “Seeking Understanding: Jewish and Aboriginal Communities in Canada,” the event was billed as an evening of learning, truth and awareness-building and drew an audience of close to 300 people, predominantly from the Jewish community.

The talk was hosted by the Shaarei Shomayim Sisterhood in partnership with Beth Tzedec Congregation, the Centre for Israel and Jewish Affairs (CIJA), Holy Blossom Temple and Ve’ahavta.

Moderated by Berl Nadler, co-chair of CIJA for the Greater Toronto Area, the panel consisted of Carolyn Bennett, Canada’s minister of indigenous and northern affairs; Tamara Podemski, a multi-disciplinary artist of Ojibwe and Jewish-Israeli heritage; Dawn Lavell-Harvard, an indigenous writer and activist, and president of the Native Women’s Association of Canada; and Seymour Epstein, a Jewish educational consultant and academic.

The four speakers drew parallels between the experiences of Jewish and First Nations people, acknowledging, in particular, shared histories of oppression and strong ties to language and land. But they also were careful to highlight differences and emphasize the ongoing oppression of First Nations people in Canada.

Levell-Harvard recounted how the Canadian government stripped her mother of her native status in 1970 for marrying a white man.

She spoke about the historical dehumanization of First Nations people and the importance of different communities coming together to protest injustice.

“Together we can change attitudes and stand together to make Canada a much better place,” she said.

Podemski, whose paternal grandfather is a Holocaust survivor and whose maternal grandparents survived the residential school system in Saskatchewan, said her Jewish grandfather felt able to share his experiences of the Holocaust with her.

Her First Nations family, however, was less able to talk about the horrors they had endured.

“[My grandparents] had children who they didn’t teach their language to, they wanted to be accepted into [white] society… And they didn’t have any example of parenting, because they’d lived until age 18 in residential school,” Podemski said.

Ultimately, she stressed, “There are similarities between Jews and First Nations in terms of coming through oppression and genocide, but there are also major differences. And that’s what will help us understand each other.”

Lavell-Harvard pointed to the distinct challenges that First Nations people face by virtue of being “outcast[s] within our own homeland.”

Being displaced in one’s one country often leads to non-native Canadians perceiving First Nations people who don’t live on reserves as “inauthentic,” she said.

“There’s no homeland existing somewhere else that we can point to as an example of what indigenous people look like in a modern era… people expect that if we’re not walking around in buckskins or living in teepees, then we’re not authentic.”

Epstein said Jews and First Nations people are similar in their staunch and often spiritual attachments to land and language, but contemporary Jews have a particular ability to remain deeply connected to Israel whether or not they live there.

“The ability to do that is a kind of secret of the Jewish People of this period, and we might want to share that secret,” he said, adding, “As long as Jews and First Nations people understand each other, there’s a place where we can communicate around issues of land.”

Epstein also said that while Hebrew is revered, Jews have historically merged Hebrew with other languages to create dialects across the diaspora, such as Ladino and Yiddish.

Podemski said it’s important for First Nations people to remain connected to their fundamental value of being “stewards of the land” despite “half of us not living on the reserve.”

Of about 500 once-active First Nations languages, only three stand a chance of being preserved, she said.

“We must understand these languages are under threat, and it’s up to us to give these last three a fighting chance. That’s where we need support,” she added.

Bennett said school curricula need to change so that these languages, as well as First Nations history and culture, are taught “not as one course but integrated into math, geography… every subject.”

She added: “We have to take personal responsibility to fill those gaps in schools… and eradicate our ignorance.”