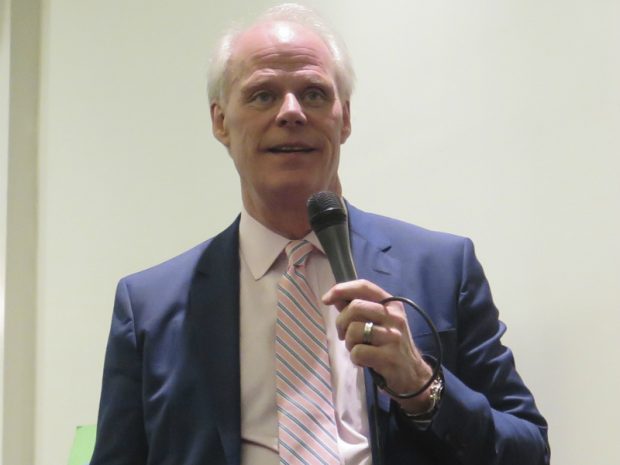 His mother died in childbirth, he was raped at eight years old, his older brother died when he was 13, he spent years as a homeless man, in and out of jail and using various substances, he lost the older sister who saved him from the streets to suicide, and yet, Oshawa, Ont. Mayor Dan Carter calls himself the luckiest man in the world.

Carter explains that it was his ability to survive these trying circumstances and come out stronger that make him so fortunate. He now uses what he learned through his hardships to help people in similar positions.

“I learned that God was preparing me to be able to serve differently than anyone else, so that I may be able to help others that are going through the same struggles I’m going through. That made sense to me,” Carter said during a talk at a community Passover seder held by Ve’ahavta at Holy Blossom Temple on April 23 for people who have experienced poverty or homelessness.

Carter ran through the list of issues plaguing Oshawa: an opiate crisis, a homelessness crisis, people struggling with mental health and addiction issues, and the largest employer in the community, General Motors, announced it was closing its local plant.

“This moment has called me to service because … I have gone through these struggles in my life. So I represent those that do not have a voice, I advocate to make sure that their voice is heard and we do everything we possibly can to make sure that those individuals are never forgotten,” he said.

Carter cited various examples of how he is following through on those words. His city has implemented a health unit that cares for people living in Oshawa’s tent cities. He and his wife raised a million dollars for a community centre in a high-needs area to provide education, access to computers and food to children. And he travels across the country speaking about mental health and suicide and how to better reach and listen to those in our community who are struggling the most.

“The reason I am here tonight is not because I am the mayor of the city of Oshawa. I’m here because I am a broken, faulted, simple individual that is just trying to do the best he possibly can with the gifts that God has given him,” he said.

Carter also spoke about Viktor Frankl’s book Man’s Search for Meaning, which Frankl wrote after he survived the concentration camps of the Holocaust. Carter said Frankl’s book really spoke to him because it wasn’t just about the experiences of the camps, but about how to find hope, promise and purpose in even the darkest times. That’s how Carter tries to live his life, he added.

Cari Kozierok, executive director of Ve’ahavta, said Carter was a perfect speaker for the community seder because many of the people in attendance could relate to his experiences. She acknowledged that when someone is stuck in a dark place in his or her life, it can be hard to see a way out. She noted that Carter is an example that it is possible to overcome homelessness and substance abuse.

Between Carter’s talk and the material aid Ve’ahavta was able to provide to people in need in the form of community, food and donations, the event was able to check a lot of boxes for the organization.

“The thinking behind (the seder) is really that during Passover we explore themes of affliction, of freedom and thinking about a new life and a future – and at Ve’ahavta, that’s what we do,” said Kozierok. “Half of our mission is to provide programming to promote positive change in the lives of people who have been marginalized, and the other half of our mission is to mobilize members of the community in meaningful ways to help and make a difference.”